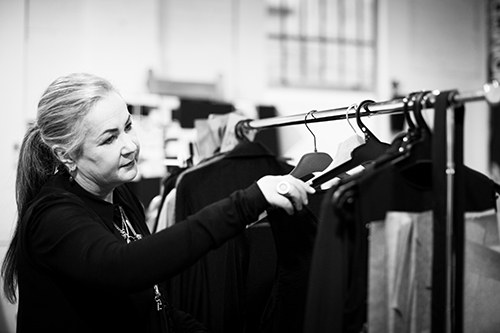 Dark and wittily sombre, NOM*D has created an iconic image on the New Zealand fashion landscape. The label's designs, which reference traditional tailoring and use reworked vintage garments, are anchored by a utilitarian approach and the concept that clothes must, above all else, be wearable.
In every collection, NOM*D maintains its credibility as a label unaffected by trends and whims, instead adopting the cool, considered gaze of the fashion outsider.

Since its inception in 1986, NOM*D has been among a small number of directional fashion labels which have been responsible for defining the style that is now referred to as 'The New Zealand Look'. As one of the ground-breaking New Zealand Four who showed at London Fashion Week in 1999, NOM*D firmly established the dark, intellectual qualities that are now synonymous with New Zealand design.
In part, the label owes its noir-ish aesthetic to Dunedin, a city situated in the remote, rugged surroundings of New Zealand's South Island where NOM*D's designer Margarita and her husband Chris Robertson are still based today. A university town, with an international reputation for its alternative music scene, and a preternaturally gothic atmosphere, the culture of Dunedin permeates the mood of Robertson's clothes. Margarita was born of Greek/Ukrainian refugee background and a preoccupation with fashion has been with her since childhood.

Through the beautiful arched leadlight entranceway in George Street, Dunedin this two-storied white-walled store has housed collections of a uniquely curated blend of sustainable New Zealand made and international clothing labels since 1978. Independently owned by Margarita and Chris Robertson, it is their instinct and vision which has enabled PLUME to remain in business for decades – a long time in fashion terms.

In 1992, the Robertson’s opened a second PLUME store. The Christchurch location in the post-earthquake CBD is a beautifully designed space and the engaged, passionate staff welcome discerning shoppers looking for clever, stylish and agenda-setting clothing.

Often touted as the 'godfather of brutal chic', Paris based Rick Owens offers a darkly glamorous take on gothic grunge.
Inspired by his wife and muse Michele Lamy, Owens gives a new meaning to the idea of functionality through monumental minimalism embodied into unique pieces which show the glorious decay of time passing.

The collaboration between Yohji Yamamoto and authentic sports brand Adidas represents design, true craftsmanship, and the future in sportswear.
The fusion of innovative design, sport functionality, elegance and spotless craftsmanship all accumulate to the success of Y-3 since its inception over five years ago.

Hand made in Paris, this sterling silver jewellery collection features lines from the most romantic poets and philosophers, the texts conveying the sensitivity and emotions that Serge wanted to share with those that would wear his jewellery.
Now directed by Serge's wife Genevieve and son Rock, the workshop remains ever faithful to the poetic sensitivity of its late founder while also developing its own new collection.